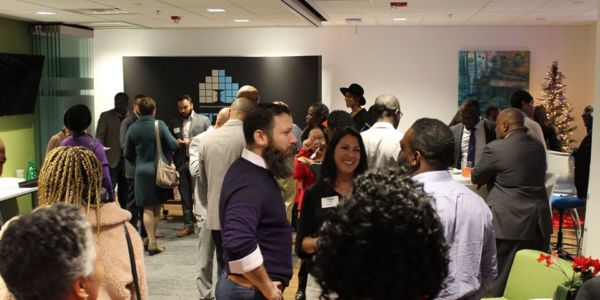 The Frederick County Minority Business Vision held its  annual holiday networking party on December 19th at the Root Building in downtown Frederick.  The event had a great turnout with 58 attendees bracing bitter cold  winds. The festive atmosphere was enjoyed by all and catering was provided by Jerk ‘N Jive Caribbean Kitchen where owner James Smith announced that he would be opening a second location here in Frederick scheduled for late February. Deserts were featured by Kimberly Lundy of Lundy’s Special Treats where she provided an array of various sweet potato pies. One new aspiring business owner Natalia Santillan provided beef and chicken empanadas for the event as well.

The networking event is held every third Thursday at the Root Building from 5-7pm.