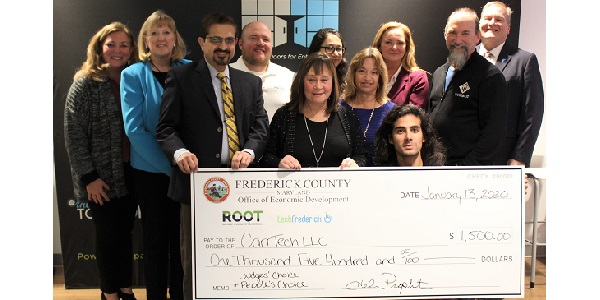 A crowd gathered at the ROOT building in downtown Frederick on January 13th for the 2nd Video Pitch Competition. This contest matches up three businesses who have recorded pitch videos through the Business Pitch Services offered at ROOT, and gives them the opportunity to win big.

Business pitches from three companies were shown to the crowd, including a panel of judges. The first video featured from local distiller American Shochu Company. Husband and wife team Taka and Lynn Amano manufacture a Japanese spirit called Shochu out of their distillery in the Frederick Innovative Technology Center. The American Shochu Company video introduces consumers to the product, while also looking to appeal to potential investors.

The second video came from medical device company CarrTech LLC. Founder Sue Carr used her pitch video to describe a problem she found while working in healthcare, and how she intends to solve that problem with a specially designed filtration needle. The CarrTech video is targeted to investors as the company looks to fund FDA approval and manufacturing costs.

The third pitch video was from Yogamour Yoga & Healing Arts Center, a nonprofit that holds yoga classes and training locally in order to fund projects around the world. Co-founders Rebeccah Bartlet and Geni Donnelly used the video to explain how their organization makes an impact both globally and in the local community.

After watching all three videos, the panel of judges convened to determine the most effective pitch. The panel included representatives from ROOT tenants Hood College, FITCI and the Chamber of Commerce, as well as M&T Bank, TechFrederick, and even Frederick County Executive Jan Gardner. The panel was told to look for the company that best described their product and their goal. After deliberating for some time, the group announced CarrTech LLC as the Judges’ Choice winner, presenting Sue Carr with a prize of $1,000.

While the judges were busy discussing pitch videos, the rest of the crowd had the opportunity to cast their vote for the People’s Choice winner. After a live counting of the votes, CarrTech LLC also claimed the People’s Choice, winning an additional $500 for the business.

Along with selecting a winner, the judges also offered helpful advice to all three companies, giving them tips on making the most out of their business pitches. FITCI CEO Kathie Callahan Brady praised the night’s big winner Sue Carr for the time and work she put into her business pitch, which included participating in “The Edge,” FITCI’s 12-week accelerator program for startup companies.