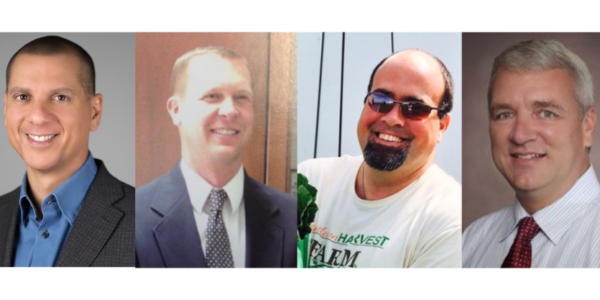 As chief executive officer of RocketDocs, PJ Bellomo has had to learn to be adaptive to the needs of his customers. A serial entrepreneur, PJ found himself in Frederick after relocating his California-based company here in 2009. Originally called Proposal Software, Bellomo and his team launched a new product that greatly expanded the total addressable market, and rebranded the business in 2018 to better reflect the expanding services offered. He is also chairman of Blue Sources, which monitors the water quality of live fish. He has served the community in a number of ways, including volunteer and Board of Directors roles with techfrederick, FITCI, the Frederick County Business and Industry Cabinet and regularly volunteers to judge the Frederick County Public Schools Science Fair.

Frederick native Scott Brunk began his role as president in 2013, and since then FoodPRO sales have increased from a little over $50 million to $90,000 million annually. Unprecedented growth in excess of 40 percent has fueled an incredible turnaround of a company flat or down, prior to Scott taking over. His approach of “Faith...Family...FoodPRO, in that Order” has revitalized a team of 120-plus to believe that the company has a continued vision of growth. Also, Scott gives back in many ways. FooPRO supports the Frederick Rescue Mission, Blessings in a Backpack, and several other local charities, and arranged to send supplies for hurricane disaster relief in Texas, Florida and Puerto Rico last year.

ImQuest BioSciences President and Chief Operating Officer Robert W. Buckheit Jr., Ph.D., has spent nearly 30 years trying to keep people safe with science. Since 1989, Buckheit has been involved in the preclinical development of anti-infective agents, particularly with a focus on for use against HIV. He has continued to develop and manage infectious disease programs for commercial, academic and government clients. In 2004, he founded ImQuest and continues to have a daily hands-on approach with the operations. ImQuest has since expanded into the development of treatment and treatment agents for infectious disease such as HIV, Hepatitis B and Hepatitis C.  ImQuest BioSciences has been recognized as the Small Company of the Year by the Maryland Technology Council and in 2010 the Frederick County Entrepreneur Council honored Buckheit as Entrepreneur of the Year.

PJ: In 2008, I found myself serving as CEO at another California-based tech startup and moving the headquarters East. I could exercise CEO prerogative with regard to relocating a business. I could have chosen anywhere from Boston to Charlotte, Va. My wife chose Frederick.

Business-wise, I found it appealing to have access to both the D.C. and Baltimore tech communities. On the personal side, my farm girl wife wanted a house in the country that sat a short 10-minute drive from one of the most beautiful downtowns we’d ever seen.

Scott: I was born and raised in Frederick.

Tony: I have lived in Frederick County for about 25 years.  I first moved here with my parents.  I fell in love with this area and my now wife.  We have built a family and business here.

Robert: I grew up near Ellicott City, Md. I found Frederick to be my home when I transferred to the Frederick location of a Birmingham-based company and founded their Infectious Disease Research Department.

PJ: A quest for productivity has driven my most successful business ventures, almost always by applying technology to remove friction from business processes. From 1999-2006 I focused on e-commerce and supply chain.  While today those technical domains concern much more than productivity, at that time we focused on speed.

Now, at RocketDocs, we serve customer-facing teams competing in complex B2B environments. A need for radically enhanced productivity sits at the heart of every problem we solve

Scott: Personal values and leadership ideas are simple — Faith, Family and FoodPRO — in that order. Always value our employees’ input, listen and take action on what they have to say.

Tony: I believe everyone wants to work in a positive, supportive, innovative work environment that challenges you and gives you purpose.  I have tried to provide that to our team.

Robert: In order to manage a successful company and fully engage both clients as well as employees, personal values are a critical key to success. ImQuest was founded on and continues to operate with a set of core, consistent philosophies that represent my core values and those of my employees. These values could be categorized as follows: 1. Respect for family and people. 2. Honesty and integrity in all of our dealings with clients, stakeholders and employees. 3. Building and cultivating relationships with those that we deal with, and 4. Effective communication with clients and employees.

PJ: Soon after we moved RocketDocs to Frederick in 2017, a top 20 global bank told us they used our software to solve a sales and marketing problem that involved responding to customer requests for sales presentations and proposals.  Two months later a top 10 global tech company used our software to solve the same problem.  In both instances our software delivered value, but we knew we could do better—and win more customers—with a revamped software design focused on the specific use-case identified by these customers.

We spent the next six months developing a new product. In Q2 2018 we completed beta trials with existing customers and just launched the product just last month.  We expect this new product, RocketDocs Response, to reflect 50 percent of our bookings in 2019.

Scott: I took over as president five years ago. Since then we have made huge investments in technology and people. We now scan all products in and out of a building. In 2018 we launched a mobile app for customers to place orders as well as a retail mobile app for our local residents to be able to pick-up any item from our 100,000 SF facility. We also have had a huge turnaround in sales growth and employees. 2013 85 employees $56 million in sales... 2018 125 employees $90 million in sales. We have had more growth in the last five years than the previous 15!

Tony: I was one of the founding family members that started South Mountain Creamery back in 2001.  I have managed the company through exponential growth over the years.  I created and wrote many of the recipes that we still use today.  In 2009, I left SMC to start my own company — Hometown Harvest.  Whereas SMC was created to gain stability and increase sales for one farm, Hometown Harvest was built to take this same concept and do it for the ag community with a focus on produce.  Last year, I returned to SMC as an owner; merging the two companies together to create a stronger sustainable local food service.

Robert: We learned early on that every product is unique and requires a unique pathway to move forward to a successful approval for clinical evaluation and eventual FDA approval to market a new drug. So, our pathway to success in our market has been to develop productive relationships with our clients where we become a member and extension of their research and development team and assist their development efforts exactly as we would develop a product of our own.

So, with regard to all the services that we offer, we modify our program to meet the needs of our client and recognize that every product being developed is different and thus a traditional cookie cutter approach does not work best.

PJ: I admire leaders who take calculated risks and learn by doing, especially if they can do so with a mix of boldness, humor, and humility.  In a business context, I imagine a composite of Warren Buffet, Steve Jobs, and Elon Musk. Outside of business, I’d point to the former college football coach, Lou Holtz—a bold, funny and yet humble leader of a championship team.

Scott: My father is the leader I most admire. He ran FoodPRO for many years and he also stresses the importance of Christian values. Also it’s not just about the bottom line but making sure we take care of all the families that work here.

Tony: I really try to listen to lessons learned from several leaders, both who are with us today and those who are not.  This list is always changing but currently includes Dave Ramsey, Simon Sinek, Jim Rohn, Zig Ziglar, Henry Ford, Walt Disney, and Earl Nightingale, plus several others.  I believe a good leader is one that is always learning and evolving.

Robert: Based on my career and interests I would have to say that the leader who I admire and respect is Bill Gates. Why? Well first, Gates has been a highly successful and visionary CEO, leading Microsoft from inception to the mega-company it is today. But my respect and admiration relates more to how he has utilized his wealth and fame — his philanthropic activities. The Bill & Melinda Gates Foundation has provided funding to address many issues that affect life in the developing world, including basic needs like water quality and sanitation to the elimination of infectious disease.

PJ: You’ve got a good chance of finding my wife and I on the weekend at one of the many fine restaurants in downtown Frederick, happily finishing-up our entrée and desperately seeking a gluten-free, dairy-free dessert.

Scott: I love going downtown for dinner and walking with family. If I am not downtown, I am on the golf course or racing cars.

Tony: I love hanging out with my family, I currently have two teenagers.  So you might find us out around downtown Frederick, or at a soccer field.  We are also farmers — so depending on the time of year, you will find us at a farmers market, in the field, or generally somewhere around the farm.

Robert: My wife and I love to hike the trails of Gambrill State Park with our Golden Retriever Bella. We are also big fans of food and drink available in downtown Frederick. A glass of wine and a meal on Market Street is a strong possibility, along with a walk along the Carroll Creek promenade, especially on an Alive at Five Thursday afternoon. I do find amazing solitude in hanging out at home with my wife Karen and Bella. So many weekends you may just find me enjoying the peace of my little slice of heaven in Myersville.