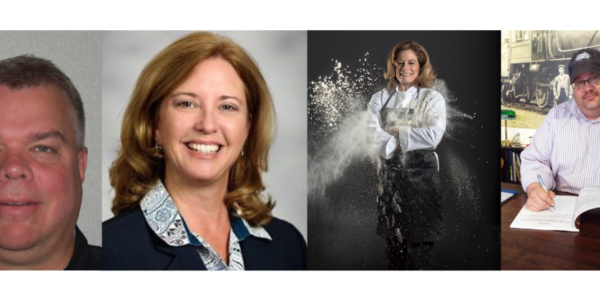 Keith Burlingame, president of Werres Corp., has a reputation for being a hard-worker who is as dedicated to his employees as much as he is to his business. Since becoming president two years ago, Burlingame has energized the staff with his positive energy and enthusiasm. By implementing an aggressive strategic plan, Werres Corp.’s revenue has grown 20 percent during the past fiscal year, which has allowed the company to grow its staff by about the same percentage. Burlingame also believes in reaching out in the community. Werres Corp. has been working with the Hurtwitz Foundation, as well as donated to Habitat for Humanity in Virginia as well as other local charities.

RaeAnn Butler has been president of Edenton Retirement Community since 1992. During her tenure at Edenton, the retirement community has tripled in size and is now home to more than 155 residents. And under her guidance, Edenton has expanded its offerings to assisted living, memory care and home care. And those who work for the retirement community tend to stay with Edenton staff; the company’s turnover is 10 percent lower than the national average. Butler also believes in being engaged with not only her staff, but with the residents as well. Through her dedication to Edenton, the staff and its residents, Butler received the Wertheimer Fellow Award in 2017.

ML Carroll Poore, owner and founder of Canapés Inc., is an example of what happens when passion and dedication can do to help the longevity of a business. For nearly 30 years, Poore has been able to continue in an industry where five years is an accomplishment. Poore also is a believer in giving back to the community by contributing food and services to such organizations The United Way, Blessings in a Backpack, The Delaplaine Visual Arts Center, Mental Health Association of Frederick County, Hospice of Frederick County, Mission of Mercy, The Women’s Giving Circle and The YMCA of Frederick County, to name but a few. And Poore is listed among Gazette’s Who’s Who to Watch in Business.

James R. Castle, president of the Brunswick Heritage Museum, has been able to turn the museum’s financial situation from the red to the black. When he was selected as president, the museum was financially insolvent. He worked with creditors, brought in new vendors, and with the help of the Board of Directors, was able to place new financial management practices into place. Castle was able to negotiate a deal with the City of Brunswick to contribute to the museum. Since he was 14, Castle has continually given back to Brunswick serving in nonprofit and government positions such as being elected twice to the Brunswick City Council and having worked for the public works/planning department. He also has served on the CASS Board and as a board member of the Brunswick Community Clubhouse for Kids.

Keith: I was with Raymond Corp. for six years as director of Corporate Procurement. Raymond Corp., which was stationed in Greene, N.Y., bought Werres Corp. in August 2016. I was asked to transfer to Frederick to take over leadership of Werres Corp., after 85 years of private ownership.

RaeAnn: Originally from Pennsylvania, I chose Hood College for my undergraduate degree and stayed to start my career.

ML: I started Canapés via series of crazy circumstances. I continued with my business while far away from my family, support system and new to the food service business. The community of Frederick embraced me and I never wanted to leave.

James:  I am a third-generation Frederick County native, a sixth-generation Marylander. I was honored to be elected to the Brunswick City Council in the year 2000 and since that time (and before) I strive to make Brunswick a better place to live, work and visit.

RaeAnn: Honesty and integrity — do what you say you will do and as a leader, model the behavior I ask of others. It is very important for me to be authentic and true. Competency — it is important for me to have the skills and knowledge to lead effectively. I have to continue to learn and grow to remain competent and strategic in my leadership. It is also important to me to build relationships with the members of my team, customers and vendors, others in the industry and my community. I think the stronger the relationship, the better a leader I can be.

ML: I am an in-the-trenches kind of leader. The food service business is a very, very difficult industry — it is long hours, hard work and challenging service situations. I lead by example.  If my staff sees me working diligently than it is my hope they will do the same. I have built a longtime loyal team. I believe in treating my team as I wish to be treated. They are offered health care insurance that the company pays 75 percent, a savings plans, vacation and sick time, a comprehensive employee manual, family meals, etc. At this point in my career, I should be more of a manager, but the reality of a successful food-service business requires me to be all involved.

James:  There is no task in the organization that I wouldn't do. If you are cleaning floors, I am cleaning floors. I strive to compromise with my board to make sure everyone's voice is heard. I love what I do and I want my volunteers to love what they do as well.

Keith: We have adopted highly integrated strategic and tactical planning aligned with corporate, market, customer, competitive, and innovation data sets to deliver the best solutions, products, technology  and services to our customers. Key highlights for innovation are a solution set of autonomous guided vehicles with a new product pipeline that includes robotics, virtual reality, and cloud-based service solutions. We had record revenues as well as record market share last fiscal year, and our organizational size has grown by 20 percent.

RaeAnn: When Edenton's campus was first envisioned, the build out would have included all independent living residences. That concept changed a few years into the project and we were able to make some great changes. Two ideas that have been initiated over the years included building assisted living and providing home care services. We began to realize that an emerging trend of assisted living in the early 1990s was a great advantage to add to our campus. I have overseen the transition and development of the assisted living since 1996. For our campus residents and the general community, licensed home care services served many where they could use the support in their home or independent living but were not quite ready for assisted living. Home care services are very versatile and it is specifically designed to provide help when and where a person is in need.

ML: Food service is ever evolving. Catering is an ever changing business. You have to remain current but true to your roots. We run a couple of corporate cafes, we do a grab-and-go, we offer so many types of catering: bbq, corporate and wedding catering. We adapt to what the needs are but always maintain the quality that gives the most bang for the buck.  Thirty years ago starting with an accidental phone call with nothing and no business education to now with a company that employs a small village with sales in excess of $2 million. It blows my mind.  There has been so many setbacks and defeats but within every lesson, there was a skill to be mastered or a lesson to be learned. I am so stubborn. Failure was never an option. Now success is an obsession.

James: Upon taking the helm of the museum, it was financially insolvent. I contacted vendors and personally guaranteed payments and a great Board of Directors passed a budget and financial controls. Through the implementation of these financial controls and a tight budget, the museum was able to claw its was out of the red and into the black. Once solvent, the Board was able to negotiate with the City of Brunswick to assist in contributing to debt associated with an elevator, which allowed the museum to host to a traveling Smithsonian exhibit. Each year, since 2015, attendance has grown, reaching nearly 10,000 visitors annually. The museum is about to kick off a capital campaign to fund needed renovations.

RaeAnn: Eleanor Roosevelt is someone who I admire. She was not someone who used her family's position and status to just sit by and watch. She took action. From a young age she developed a role for herself; not by meeting others expectations and standards but rather worked on issues that were important to her and set out to achieve her own goals. A person highly engaged in diplomacy, social activation and equality, she showed how women could work to bring about change, educate and diplomatically transform situations for the benefit of others.

James:  Former Brunswick Mayor Carroll Jones was the first leader I worked beside of to better the lives of others. He taught me, over time, to care less about myself as an elected official and more about the residents I represented.

RaeAnn: I make time on weekends, weather permitting, in the late spring, summer and fall to work in my yard. I also love it when a pretty day means I can walk the entire length of Carroll Creek Linear Park with my doodle dog, Molson. Or, attend a concert at the Baker Park Bandshell with friends on a Sunday evening in the summer. You’ll also find me attending benefit events for nonprofits I support. It might be a garden party at Heritage Frederick, a 5K around Baker Park, the Walk to End Alzheimer’s at the Great Frederick Fairgrounds, reunion weekend at Hood College, or a volunteer project at my church — Evangelical Reformed UCC.

ML: In my business, weekends are a rarity and I tend to work every day, but when I do have down time my husband and I live downtown and love to power walk the park, people watch from our balcony on the creek and stroll to our favorite eaterie. We also play golf when we can at the numerous courses in our area.

James: I can be found enjoying the C&O Canal metal detecting in a farmer's field, reading a book at the Brunswick Library or any location working on research.