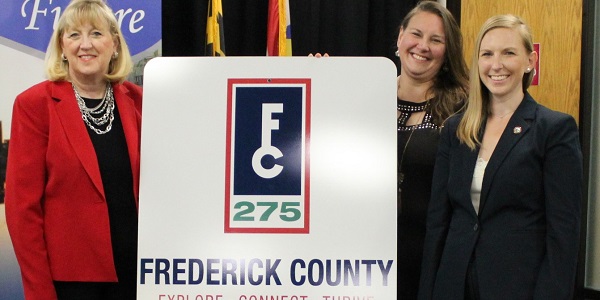 FREDERICK, Md. – Frederick County will mark its 275th anniversary with a year full of events to mark the community’s rich history. County Executive Jan Gardner unveiled a special logo to commemorate the occasion. The distinct key-shaped image will appear on road signs promoting the year’s theme, “Explore, Connect and Thrive.” Executive Gardner announced that the celebration will kick off with a New Year’s Eve Key Drop along Carroll Creek, in partnership with Civitan Club of Frederick. Special events are being coordinated by the 275th Anniversary Planning Committee, comprising local historians, public engagement specialists, business representatives, tourism and recreation experts.

“Frederick County loves its rich history, and we want people to get keyed up about our 275th anniversary,” Executive Gardner said. “Our local history has helped to shape our nation. I am confident we will continue to shape a bright future during our next 275 years.”

On June 10, 1748, the Maryland General Assembly passed legislation to create Frederick County from a portion of Prince George’s County. The legislation took effect in early December of that same year. To mark the passing of the legislation, there will be a family-friendly event on June 10, 2023, at Utica Park. The annual Museums by Candlelight Tour is being timed to coincide with the December enactment of the legislation. Many of the year’s events are still in the planning stages, and there are opportunities for community groups and businesses to partner with the 275th Anniversary Planning Committee. A special commemorative book is being published, and other branded merchandise will be available.

To learn more, people can visit www.FrederickCountyMD.gov/275, which includes a calendar of events, a short promotional video, and information on how organizations can apply to become community partners. People can also stay up to date via Facebook, Instagram, Twitter, or by texting “FC275” to 888777. Contact Planning Committee Co-Chairs Heidi Keeney and Kari Saavedra at 275@FrederickCountyMD.gov.