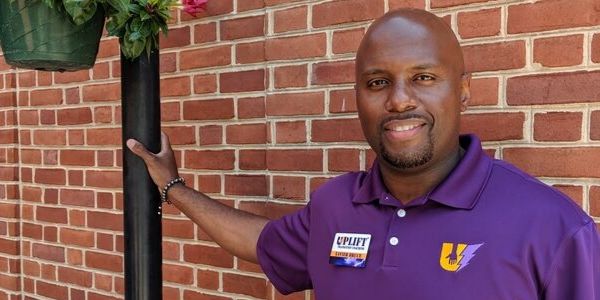 When Dr. Xavier Bruce was preparing to retire from the military after 24 years, he was left with a lot of questions about what that transition would be like. The shift from the military world to civilian life can be tough to navigate. Going through the experience, Bruce found that mandatory transitional programs focused on the logistics of civilian life but left gaps when it came to the emotional adjustment of leaving the military behind.

Bruce joined the military right out of high school, deciding to attend the Air Force Academy. After growing up in rural Arkansas, he followed in his brother’s footsteps and joined the Air Force. Over the next two decades, that decision turned into a career for Bruce. During that period, Bruce found himself looking for help in dealing with stress.  He experienced the end of a marriage, being deployed to Afghanistan, and he was raising his children while working toward a doctoral degree. Without mentorship or guidance to help him handle these stresses, Bruce turned to his passion for learning and dove deep into practices and theories of perception, energy, influence, fitness, nutrition, and biology. That led to the creation of his own self-development framework.

As his military retirement date got closer, Dr. Bruce sought out a life coach to help him with this big transition. After struggling to find a coach he could relate to, he decided to fill the niche himself and train to become one. This allowed him to take his newly-developed strategies and use them to help others.

In May of 2018, after a year-long training in Philadelphia to become a certified life coach, Bruce created his business “UpLift.” The mission of UpLift is to encourage transitioning service members to design and execute a holistic transition plan as they leave the military and go into the real world. Using his knowledge and personal experience, Bruce is able to help those dealing with the stress and anxiety of transition. He cites the “fear of the unknown” as being his own biggest struggle in transitioning. While helping service members is one of Bruce’s biggest passions, UpLift is not just limited to those in the military. He aims to help guide anyone going through a major life transition. He lists those who are recently married, divorced, unemployed or underemployed, high school or college graduates, or those making the move from a corporate job to owning a business, as examples.

Now married and settled in Frederick, Bruce has found that getting involved in the community and joining groups like the Frederick County Minority Business Vision are only feeding his passion to help others. He says the Frederick business community and its “collaborative over competitive” attitude is what helps him the most. He also finds support from his wife and business partner Alisa, who focuses on the nutrition and fitness side of UpLift’s program.

Dr. Bruce officially retired from the Air Force in July of 2019 as a Lieutenant Colonel, and has spent much of his time since then focused on the future of UpLift. He has been speaking at a number of area events and is marketing his services beyond the Frederick area. His future goals include finding a permanent space for UpLift to hold meetings and workshops. Bruce says his experiences and his ability to relate to others are huge when it comes to coaching. Having just retired and transitioned so recently, he can easily relate to the people he is mentoring. With Bruce’s willingness to help others and his positive energy, it’s easy to see why UpLift is a fitting name for his business.

You can learn more about the concepts behind UpLift, and contact information to reach out to Dr. Xavier Bruce, at www.uplift.coach.