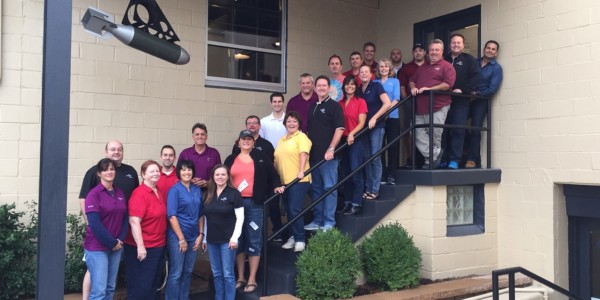 En-Net Services first opened their doors in Frederick in 1996. Two decades later, the technology company is thriving and was recently named to the CRN 2017 Fast Growth 150 List, an annual ranking of North America-based technology integrators or consultants that have experienced signficant economic growth over the past two years.

En-Net is a family business owned by brothers Brian Sheffer and Kyle Yost. They are joined by several other family members and longtime childhood friends as part of the day-to-day staff. Today, close to 30 people work as a team to provide high quality information technology solutions to federal government agencies as well as state and local governments and education entities throughout the United States.

In 2009, En-Net moved into a historic torpedo factory on North East Street in downtown Frederick. The building was renovated to combine the best of old and new to create a unique and high energy work environment. The additional space allowed the company to expand their solution offering while also hiring specialists in the fields of cabling, infrastructure, cyber security, audio/visual, education and networking.

In 2011, CRN started including En-Net on their VAR500 list which ranks the top 500 technology integrators in North America on a yearly basis. The CRN Fast Growth 150 list is CRN’s annual ranking of North America-based technology integrators or consultants that have experienced significant economic growth over the past two years. The 2017 list by CRN is based on gains in gross revenue between 2014 and 2016.