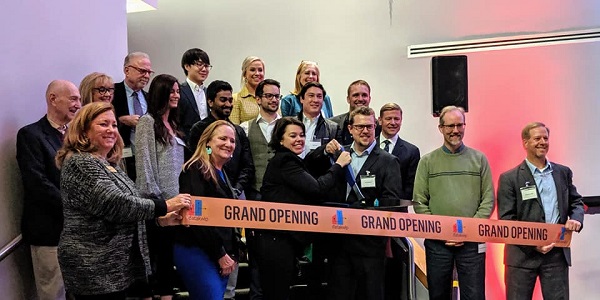 On November 13th, energy software platform Datakwip celebrated the company’s grand opening at its new location on Aviation Way in Frederick. The night celebrated a success for both Frederick County and the City of Frederick for being the landing spot of an exciting technology company, but it was also a success for the Frederick Innovative Technology Center, Inc. (FITCI).

Datakwip called FITCI’s downtown Frederick location home before moving into their own set of offices next to the Frederick Airport. Company President and CEO Cory Perdue says being a part of FITCI played an integral role in the growth of the company.” In just months spent in Frederick’s incubator, Datakwip doubled the size of its team and was able to establish important connections, partnerships and opportunities from that experience.

The company first began in 2015 as a consultancy creating “Smart Building Roadmaps” for commercial buildings. After finding a disconnect in the recommendations and improvements, the company sought to solve the problem themselves. In 2017, the Datakwip software platform emerged to analyze and communicate the building’s data to its users. The software connects right to the building’s existing technology to detect and recommend suggested energy savings improvements. These no-cost and low-cost changes save facility owners and engineers an average of 15 percent in annual energy expenses.

Growing from 3 to 7 employees in just six months, Datakwip continues to expand and is always looking to add to its team. The company’s next big goal is establishing the Datakwip Partnership Network, based on the idea that the companies are even more powerful when working together. Through this network, Datakwip is partnering with a number of other companies who share a common vision of energy efficiency in the built environment.

Things don’t seem to be slowing down anytime soon for this FITCI graduate. Armed with strong local connections and a passion for energy-saving, Datakwip is making a name for itself in Frederick County and beyond.