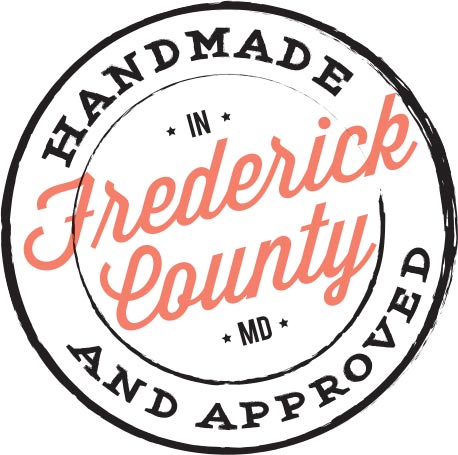 The county is home to the first farm brewery, first meadery, and first cidery in Maryland, as well as the largest winery (Linganore Winecellars) and largest brewery (Flying Dog) in the state. Frederick County is also home to the first craft beverage trifecta – Springfield Manor – offering wines, beers and spirits. In 2016 Frederick was ranked number 17 in the Best Cities in the World for Craft Beer by Matador Network.

While this industry has deep roots in the county, starting with Brewer’s Alley in 1995 and followed shortly after by Frederick Brewing Company (now Flying Dog), the recent significant growth has been very strategic and intentional. The Frederick County Craft Beverage Growth Program is a comprehensive program designed to drive growth in this industry sector through a combination of existing business expansion (tourism-focused and promoting the existing businesses), as well as through start-up support and attraction by establishing Frederick County as the most desirable, and easy, place for the craft beverage industry to thrive. 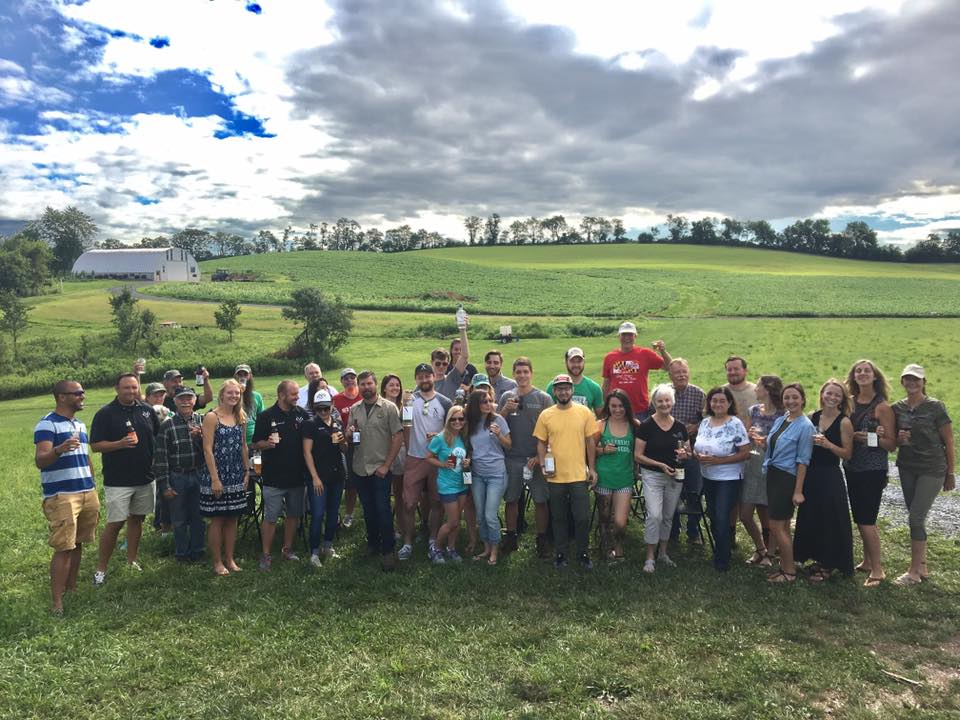 In late 2015, the initial program launched with a focus on growing the existing industry through a tourism-focused marketing effort. OED partnered with the Tourism Council of Frederick County to create the first Frederick County Winery, Brewery, Distillery visitor’s guide, which was initially printed and distributed in June 2016. This brochure won the 2016 Maryland Tourism Council Award for the Best Promotional Marketing Piece, and was used as a model for statewide brochure produced by Grow & Fortify.

The second phase of the Craft Beverage Growth Program launched with a comprehensive effort to address regulatory hurdles, provide start-up support, and to market Frederick County as the ideal place to locate or start a craft beverage business. Strategic local partnerships were formed to include the City of Frederick Department of Economic Development (DED), the Tourism Council of Frederick County, the existing craft beverage industry and the agriculture community.  The Craft Beverage Growth Program included:

Creation of a start-up guide How to Start a Winery, Brewery, Distillery in Frederick County (WBD): To further grow this industry and make it even easier for entrepreneurs to launch their businesses, OED created this How-to guide which outlines how to navigate the federal, state and county process for starting a craft beverage business. The guide was created with input and advice from the Frederick County Division of Planning, Frederick County Liquor Board, Brewers Association of Maryland, Maryland Wineries Association, and the Maryland Distillers Guild, as well as several local wineries, breweries, and distilleries who 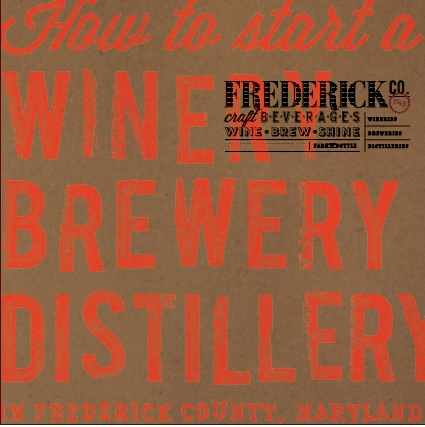 provided feedback first hand from their experiences going through the process.

Modeled after the previously produced How to Start a Business guide, the WBD guide starts with a “Wine, Brew, Shine in 10 crafty steps,” then each beverage type has a page on State alcohol regulations and county zoning and permitting information. The pages are designed as inserts to allow for the information to be customized based on whether the business is a winery, brewery or distillery. There are also pages that apply to all craft beverage businesses, including a page on local zoning, health department, parking, lighting, and life safety requirements; a page of contacts from the Federal, State, and County level departments that will be of assistance throughout the process; and a page with local regulatory information pertaining to food trucks as this is a popular way of providing food at craft beverage establishments. This guide has attracted interest from across the country and the world, with interest from as far away as California and France.

OED partnered with the City of Frederick Department of Economic Development and the Tourism Council of Frederick County and participated and exhibited at the American Distilling Institute Conference held in April, 2017. The Frederick team highlighted the area to the attendees and showcased Frederick County as an ideal place to start, locate and expand. As the only County or State exhibiting, Frederick shined as a business Friendly place for new craft distilleries.

OED participated in the Craft Brewers Conference tour that came to Frederick County in April 2017. With approximately 100 people participating in the Frederick tours, many were very impressed with the ability to have Farm Breweries in Frederick.

Planning & Permitting Outreach: In December 2016, OED hosted a tour of Frederick County wineries and breweries for the County’s Permitting, Zoning, and Development Review directors. This allowed business owners to share concerns with County staff as well as discuss where the industry is headed. Staff had the opportunity to see the impact of these agricultural businesses. The tour helped staff develop the first draft of the text amendment for the new Limited Farm Alcoholic Beverages Tasting Room.

Exemption from Site Plan Process: After listening to the industry through the permitting tour, as well as public meetings, the County heard the need for a simpler process that helps new businesses thrive in Frederick. As a part of the Farm Distilleries and Tasting Room bill, a definition for a Limited Farm Alcoholic Beverages Tasting Room was also introduced in February 2017. This new legislation allows a Farm Winery, Farm Brewery, or Farm Distillery to have one accessory structure for the purpose of tasting and retail sales of alcoholic beverages, and spirits that are brewed, distilled, or produced on the farm. Under this definition tasting rooms under 1,500 sq. ft. are exempt from the County’s Site Plan process.

Food Truck Workgroup: In early 2017, Frederick County put together this workgroup to look at regulations pertaining to food trucks onsite at wineries, breweries, and distilleries. This workgroup was made up of the director of Permitting, a representative of the Frederick County Health Department, the Frederick County Fire Marshall, Grow & Fortify, and the City DED. This group, led by OED staff, brought together all stakeholders to come up with common sense regulations on food trucks. Now Frederick County wineries, breweries, and distilleries can have food trucks as an accessory use. This allows craft beverage businesses the opportunity to expand their business as well as join in on the tremendous growth we have seen in the food truck industry. Through this workgroup OED staff have been able to better communicate with Health Department staff, as well as provide monthly updates to our businesses regarding the licensed and legally-operating food trucks in the county.

Frederick County Craft Beverage Brand and Logo: In conjunction with the How-To guide, OED developed a craft beverage brand for this thriving industry to further promote both tourism and economic development. Two logos were created, including a Frederick County Craft Beverages Wine, Brew, Shine logo and a Handmade in Frederick Logo. These craft beverage logos are available to all local wineries, breweries, and distilleries to use free of charge. The Wine Brew Shine logo pays tribute to the agricultural heritage of the products, and directs those seeing it to www.homegrownfrederick.com, which includes an online directory of all the businesses in the industry.

Craft Beverage Attraction Video: The Craft Beverage video is focused on why businesses should locate their craft beverage business in Frederick County. It features the Linganore Winecellars (the largest winery in the state), Flying Dog Brewery (the largest brewery in the state), Milkhouse Brewery which is the first farm brewery in Maryland, and Tenth Ward Distillery whose owner is also the chair of the marketing committee for the Maryland Distillers Guild. The video launched at the Great Frederick Fair Homegrown Frederick Building (details below), where it reached an audience of more than 10,000. In addition, through social media the video post reached 3,023 with the original post and was shared 128 times. The video remains OED’s top post on Facebook and Twitter of all-time and is available for viewing on OED’s YouTube channel. 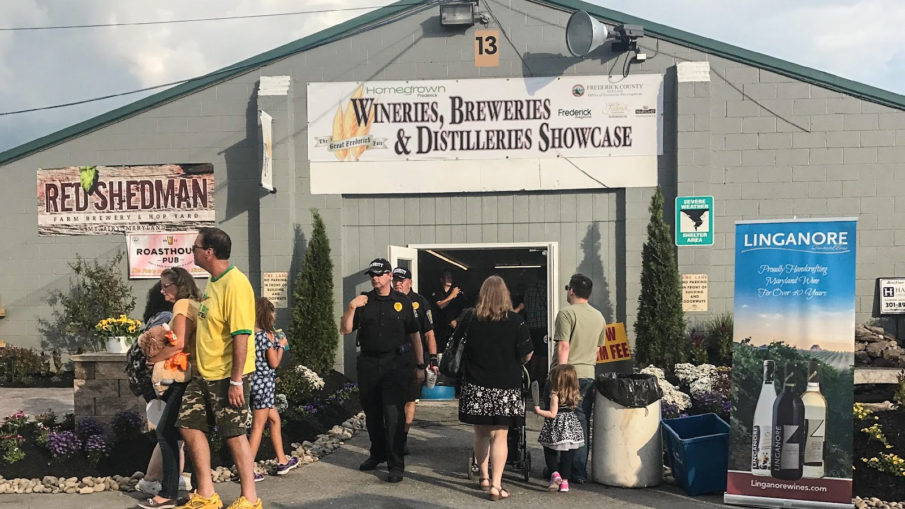 k Fair: A unique partnership was created to launch a Homegrown Frederick Building at the Great Frederick Fair in partnership with the Great Frederick Fair, Grow & Fortify, Frederick Magazine, and the Tourism Council of Frederick County. This building showcased educational displays, demonstrations, live acoustical entertainment, as well as Frederick County craft beverages to taste and purchase. This initiative blends traditional agriculture with the emerging industry of craft beverages, and it was the first time locally-made beverages were made available to fair-goers. Three distilleries, one winery, and five breweries participate in the inaugural year, and had great success both in marketing their products to a whole new audience and educating the community about the ties between agriculture and their products. Attendees wishing to participate in tastings were given a wristband at the door and 10,621 wristbands were given out.

Frederick County’s comprehensive and strategic approach to growing the craft beverage industry has been used as an example of best practices in numerous forums. At the summer MACo conference, Grow and Fortify and Miles & Stockbridge served on a panel discussing this industry and used Frederick County as an examp 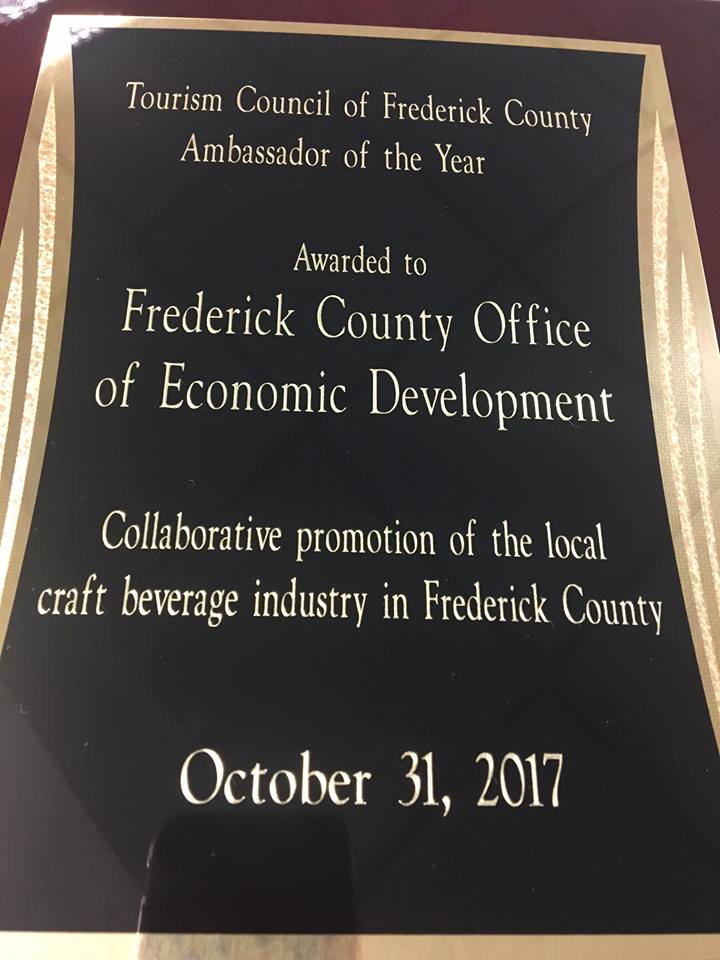 le of best practices for the work done in regulatory reform. OED staff presented at the December 2017 Rural Maryland Summit on the Value Added Agriculture Panel to discuss the impact that this industry has had on the diversification of Frederick’s agriculture industry.

The Craft Beverage Growth program is truly a team effort. This industry has been identified as a target by OED, City DED and Tourism. All three entities work closely together on attraction, retention and marketing initiatives. As outlined above, every initiative has included a variety of partners and stakeholders. In 2017, the Tourism Council of Frederick County awarded OED the Ambassador of the Year for the collaborative promotion of the craft beverage industry.

Beyond the traditional economic development partners, efforts under this program have built relationships with County Planning and Permitting, the Frederick County Health Department, the Frederick County Fire Marshall, the Frederick County Liquor Board and other regulatory agencies who have been willing to come to the table to explore ways to streamline processes, communicate a predictable and transparent process for permitting and licensing, and share information about the clients each entity is working with to reduce duplication of effort and provide a coordinated approach to supporting new businesses in this industry.