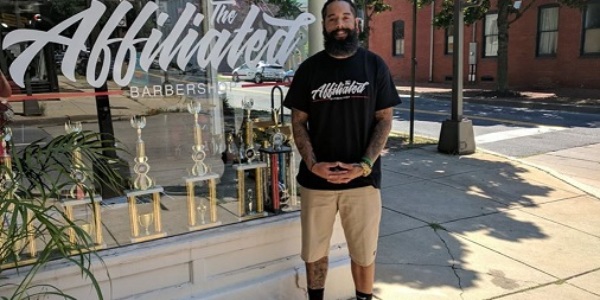 Whether you know him by “Colekutz” or you know him simply by “Chris,” Christopher Foreman is certainly making a name for himself in his hometown. The Thomas Johnson High School grad grew up with a passion for service. Foreman says it’s that desire to help others, combined with a strong work ethic from his parents, that have made him the man he is today.

Years of giving haircuts to family and friends led Foreman to the realization that his hobby could become a career path. After serving in the Marines, he studied at Award Beauty School in Hagerstown and began training under a Master Barber. Foreman quickly gained attention, competing in a variety of hair competitions and working in high demand under the name Colekutz. Now in his thirties, Foreman is on the other side of the hair world. He now gets asked to judge those same competitions he once won trophies in, and is working to become a Master Barber himself.

Earlier this year, Foreman took a leap of faith when he opened up his very own barbershop in downtown Frederick. The Affiliated Barbershop has been a labor of love for Foreman and his family. Even with the work complete, Foreman’s goals just keep getting bigger. With 9 employees and a newly renovated space, he is already brainstorming about his next expansion. All of the hours put into designing, creating and operating The Affiliated Barbershop are 100 percent worth it according to Foreman, who lists his 3 children as his main drive for success. He says creating a legacy for them is what life is all about.

Besides his own children, Foreman cites inspiring youth as one of his major passions as an adult. It’s one of the reasons he chose to open his barbershop in his hometown of Frederick. He wants to be an example for the next generation, acting as a mentor to area teens who could benefit from the support. Foreman’s passion to help the less fortunate certainly doesn’t stop there. The barber can often be found sharing his gift with those in need in the form of free haircuts. From cutting hair at an event held for battered women, to offering children’s haircuts at events through Hayden’s Heroes, to bringing a group of barbers and supplies and to the Way Station, Foreman says having the opportunity to give back to his community is what truly makes him happy. Chris Foreman wears a lot of hats these days, from barber and businessman, to father, volunteer and mentor. So whether you know him as Colekutz the award-winning barber or as Chris the community-minded entrepreneur, Christopher Foreman is truly living out his dream in Frederick County.