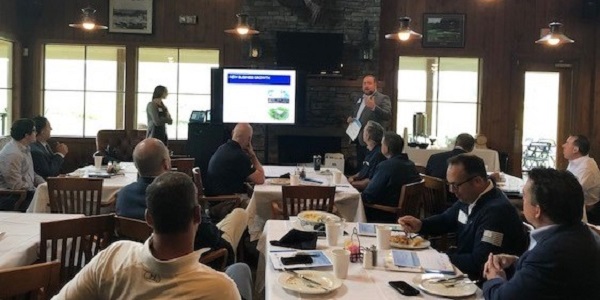 This summer the Frederick County Office of Economic Development (OED) teamed up with partners from the City of Frederick Department of Economic Development (DED), as well as Nick Damoulakis of Frederick company Orases, to plan an outing bringing CEOs from around the region to Frederick.  The goal of the outing was to introduce the CEOs to the area, provide information on key projects, and make them aware of investment opportunities in Frederick County.  The group decided to include local CEOs as well, inviting those named in OED’s publication of the Top 50 CEOs in Frederick County. Combining the two groups of business leaders provided opportunities for each of the decision makers to discuss prospects for partnership and investment.  A total of 20 visiting and 25 local CEOs participated in this inaugural CEOConnect event.

The half-day event began with a presentation to the visiting CEOs from Matt Doyle of OED and Becky Kaler of DED. The question and answer session focused on current trends and key industries for Frederick County.  Tony Checchia of VCRE.co then spoke to the group about opportunity zones within the county. Checchia gave examples of local projects that are already, or possibly could be, taking advantage of this tax incentive. The visiting CEOs then boarded a bus touring downtown Frederick, the Frederick Municipal Airport, a local Hemp Farm, and Flying Dog Brewery.  Along the way, tour guides and business leaders had incredible conversations with the visiting group. The culmination of CEOConnect was an afternoon lunch at Whiskey Creek Golf Club that brought together the visiting business leaders with Frederick’s Top 50 CEOs.  The meal, introductions, and networking were enjoyed by all, with several attendees sticking around after the event to continue their conversations on the golf course. Several business deals have already stemmed from this event, and one company is looking to open a Frederick location after being impressed by the community. Many of the visiting CEOs have since reached out, already excited for the next opportunity to visit Frederick County.  The inaugural CEOConnect proved to be a great success, and continued efforts to bring economic development opportunities are being planned for next year.

Are you a business decision maker looking to visit Frederick County?  Contact Matt Doyle by email at mdoyle@frederickcountymd.gov for information on future events and opportunities.