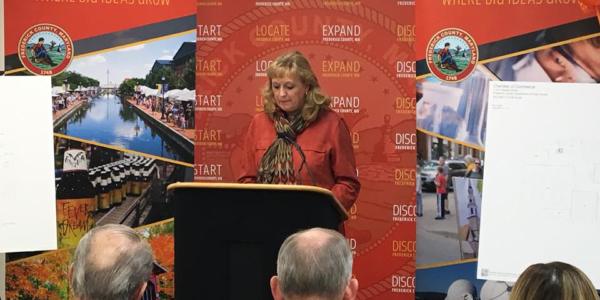 County Executive Jan Gardner announced plans today to bring partners from the public and private sectors under one roof for the new Business & Technology Cultivation Center at 118 N. Market Street in the heart of downtown Frederick.

“I am thrilled to unveil plans to bring to life a new idea, a new plan and a new joint venture to jumpstart new business and create jobs,” said Executive Gardner. “This is good government in action.”

Tenants in the Cultivation Center will include the Frederick County Chamber of Commerce and a technology incubator operated by the Frederick Innovative Technology Center Inc. (FITCI). They will join the Frederick County Office of Economic Development (OED) and economic development staff from municipal, state and federal agencies, who will all have office space in the center so they can collaborate and cultivate new ideas and a creative, collaborative environment.

Executive Gardner also announced an agreement between Frederick County Government and the U.S. Army Medical Research and Materiel Command at Fort Detrick that will facilitate the transfer of technology for commercial applications. Tech transfer creates opportunities for entrepreneurs to develop new technology into products that can be taken to market.

The first tenant to join OED in the Cultivation Center will be the Chamber of Commerce. After many years of being located on the outskirts of town, the Chamber’s Board of Directors voted to return downtown. The move was supported by the Maryland Department of Housing and Community Development, which provided $150,000 to the Chamber to renovate the second floor of 118 N. Market Street. The organization’s downtown offices are expected to open by June 2017.

FITCI’s technology incubator will occupy the building’s first floor, complementing the existing incubator on Metropolitan Court. The incubator will include a variety of flexible work spaces that can evolve as entrepreneurs evolve and growth their businesses. Fit-out of the incubator space is expected to begin this fall.

The county-owned facility previously housed the Public Works Division and Parks & Recreation Division prior to their move to the Bourne Building on Monevue Lane. Executive Gardner made it a priority to transform the building into a thriving public-private sector center to create and sustain jobs, because, as she said, “Job growth is not only economic development, it is also community development. My administration means business! This Business and Technology Cultivation Center will be transformational.”

For more information about the center, contact OED Director Helen Propheter at 301-600-1058 or via e-mail at hpropheter@FrederickCountyMD.gov.