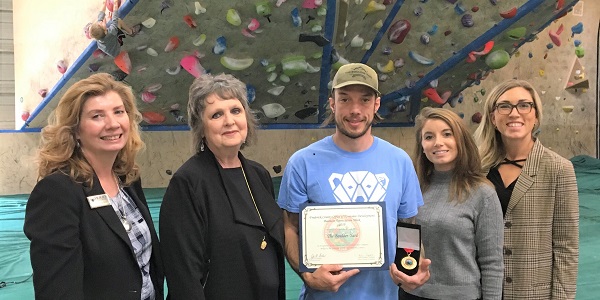 During Business Appreciation Week, we were able to visit 116 unique businesses in Frederick County, recognizing them as Hometown Business Heroes. One of these businesses was The Boulder Yard, an indoor rock climbing gym specializing in boulder-style rock climbing for people of all ages and skill levels. It’s not very often that you walk into a business and every aspect of it was built by the business owner. From the towering rock climbing walls to the flooring, the electrical, and even the plumbing, owner Steve Baranski had his hand in every part of creating The Boulder Yard. Baranski and his crew started building the rock climbing facility in the Spring of 2018 and The Boulder Yard officially opened its doors six months later. Baranski’s history with rock climbing, however, goes back much further than that.

Growing up, Boy Scouts was a big part of Steve Baranski’s life. Scouting made a huge impact on his life and introduced him to his love of rock climbing. As he got older, Baranski studied engineering and worked in various trades, eventually leading him to a job designing and building fitness facilities. All of that experience, coupled with a passion for climbing, led him to creating his own business. When it came to choosing a location for his rock climbing gym, Baranski says Frederick just made sense thanks to its proximity to many parks and coveted outdoor climbing spots. The photograph on the left was taken from a recent trip to Cunningham Falls. With rock climbing being a newly-added Olympic event and competitions getting television coverage, Baranski says he sees the sport gaining momentum quickly.

In order to accommodate all levels of climbers at The Boulder Yard, Baranski and his setting team change up 15 to 20 of the color-coded climbing paths each week. This ensures that there is always a new challenge to conquer. Baranski is proud of the team of employees he has built, which includes several females and the only female head setter in the state of Maryland. Keeping the climbing paths new and different is big for the facility, as it is designed to be used as a competition gym. As a competitive rock climber himself, Baranski is excited about the talent coming out of his facility. The gym’s entire competitive climbing team has qualified to move onto the regional level, with hopes of making it all the way to Nationals.

The Boulder Yard is many things. It is a rock climbing facility for adults and for children, it is a yoga studio offering classes 5 days a week, it is a gym with weightlifting equipment, it is a training center for some of the best climbers in the state, but most of all, it is a community. The harness-free bouldering style of climbing at The Boulder Yard provides opportunities for all ages and abilities. Baranski says his main goal with the space is to provide a “welcoming community” where first time climbers and professional rock climbers alike feel comfortable. Visitors are encouraged to bring friends, kids, food, and even dogs along with them to the rock gym. Baranski’s passion for community stretches far beyond the walls of his rock climbing gym. He cites “giving back” as one of his biggest motivators to own his own business. Through The Boulder Yard, he is able to offer special discounts and days for groups like scouts, veterans and emergency service workers. Just in the past year, The Boulder Yard has held events to raise money for cancer research and to support local animal shelters.

Baranski doesn’t plan on slowing down anytime soon. The rock climber and business owner has plans to add more climbing walls to his facility and hopes to expand in the future. His current project involves working on a guidebook for rock climbing throughout Maryland. The publication is expected to come out next year and will feature many of the climbers who train at the Frederick gym. Events at The Boulder Yard are also keeping Baranski busy. During the summer, the facility hosted a festival that brought out hundreds of visitors. Their next big event is a partnership with fellow Frederick business Surelocked In. On November 1st, the entire rock gym will be turned into an escape room for the day. To keep up with the gym’s schedule of events, you can follow The Boulder Yard on various social media platforms, or check out their website at https://www.theboulderyardmd.com/.