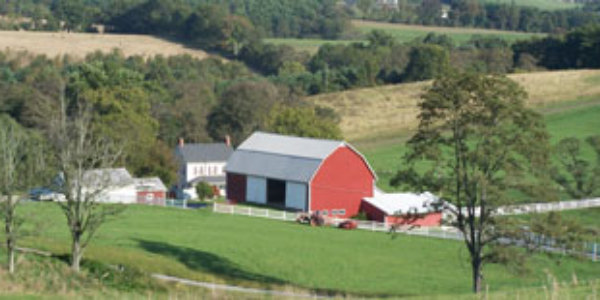 The 2019 Awards were presented opening night of The Great Frederick Fair. This year’s award winners are:

Mid-View Farm is a 5th generation diversified farm operation located in Jefferson, operated by the Tucker Family.  Stanley Tucker was the 4th generation to operate a 350 cow dairy herd, along with his wife Sandy, and children Justin and Rebecca.

The Tucker family began shipping milk to Maryland and Virginia Milk Producers in 1923.  The herd was Stan’s legacy, passion, pride and joy.  Stan and family put their heart and soul into caring for their cattle which allowed them to become one of the oldest and top-grade herds in the State of Maryland and the country.  Mid-View Farm was recognized by Maryland and Virginia Milk Producers in 2006 and 2017 for being the Producer of the Year, as well as being recognized by the National Mastitis Council. 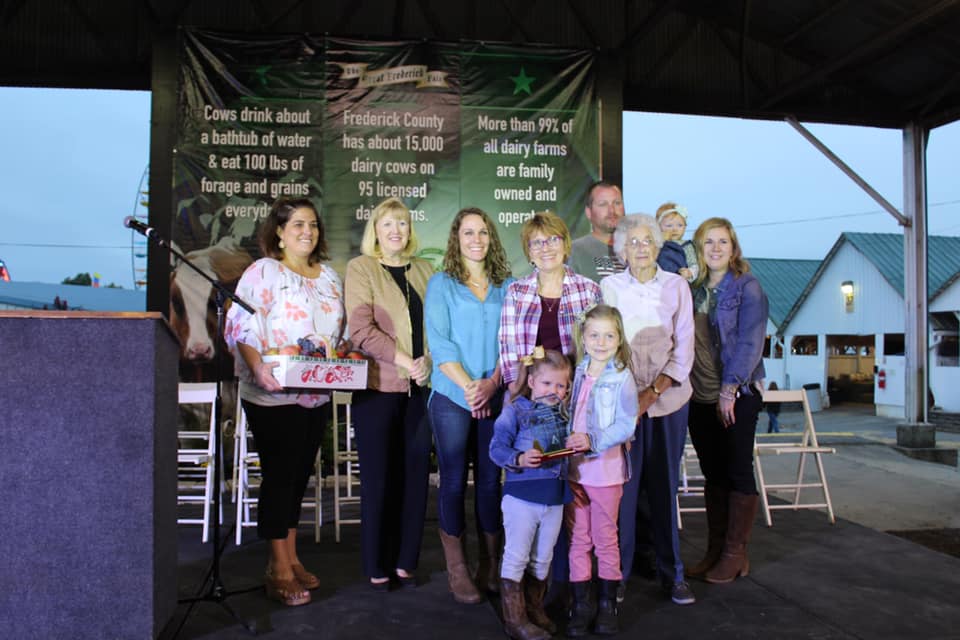 Stanley and Sandy’s children, Justin and wife Mary Kate, Becca, along with grandchildren Adrienne, Meeghan and Mia Grace, were active members of the family operation.  Justin managed the crops and feeding of the herd, while Becca managed the cows along with her parents.

In 2008, the family was handed life-changing news when Stan was diagnosed with multiple myeloma precursor, which became an active cancer in 2011.  Through his battle, Stan dedicated his life to his family and continued to build on the farm’s many successes.  Stan’s battle was ultimately lost on December 30, 2018.  Recognizing the changes in the dairy industry, in 2018, the family made the bittersweet decision to disperse their dairy herd on March 7, 2019.  Today, Justin is continuing the farming operation, farming 1,300 acres of corn, soybeans, and cover crops. 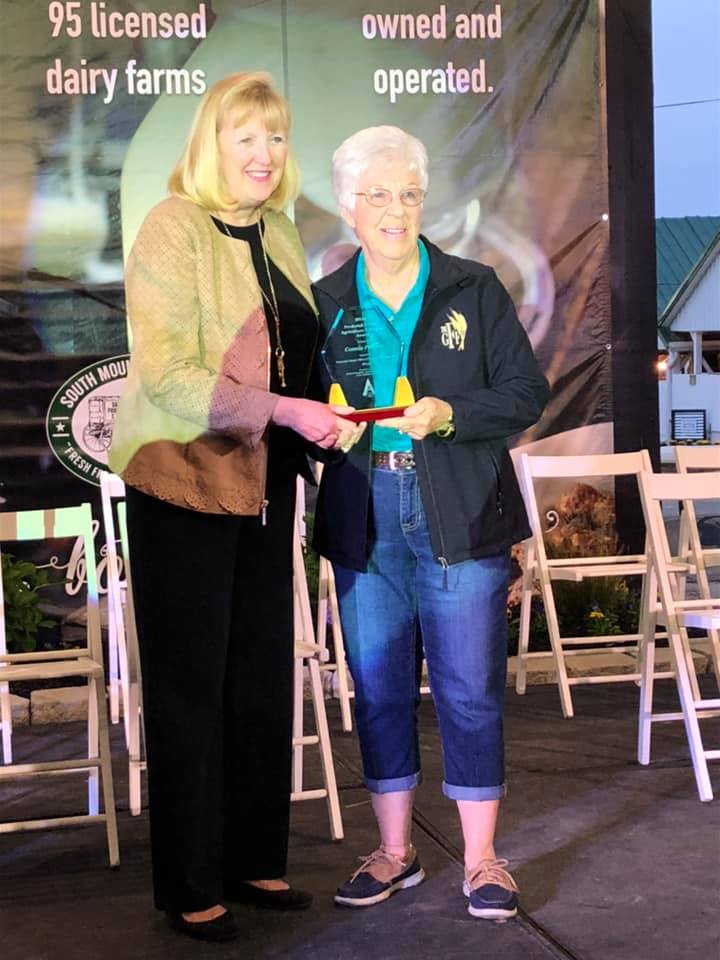 Living to serve is a statement that fits our Ag Advocate of the Year, Connie Palmer has dedicated her life to educating the next generation about agriculture. Leading up to the fair and during the fair, Connie can be found in the Farm and Garden building as a Co-Superintendent of the building her 23rd year leading the building. Since taking over her goal has been to make the building as educational as possible as well as successful for exhibitors. Connie has taken great pride in the Ag education programs at the great Frederick Fair. While not advocating at the Great Frederick Fair, Connie is an active member of the Maryland Association of Agricultural Fairs and Shows serving as the Treasurer for the 13th year as well as a member of the Executive board. Serving on the Convention and Fundraising Committee she has helped share ideas, practices and regulations that help to create the best fairs possible. In 2012 Connie was honored by the Maryland Association of Agricultural Fairs and Shows as the Fair Person of the Year for her dedication to the organization and fairs across the State.

Connie has been a lifelong Farm Bureau member serving as the current chair of the County’s Women’s Leadership Program, and many years as a director. Giving back and educating has been her passion she greatly enjoys helping with the Ag Week at the Mall, demonstrations here at the fair, Farm Bureau Legislative Day, Breakfast on the Farm as well as numerous other committees and events through the Farm Bureau. 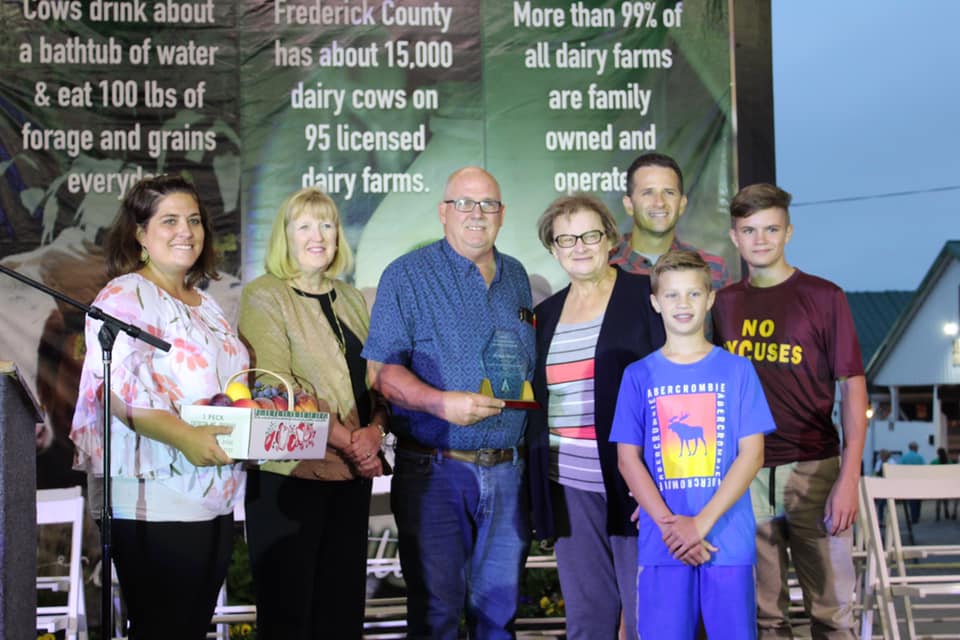 Since 1849 Hemps Meats has been a staple in the Jefferson community, Abraham Hemp Senior established a livestock and meat market company. Over the last 170 years the business has been passed down to the next generation with today the 5th generation brothers Billy and Gary running the family business. In 1891 Abraham Junior assumes the family business, in the 1920’s R. Douglas joins his father in business forming A. Hemp and Son. In 1947 sons Bob and Bill join their father in business forming R.D. Hemp and Sons during this time Livestock trading and local meat delivery were major components of their business. In 1974 the 5th generation Bill’s sons Billy and Gary and Bob’s son Doug join the family business, the business name becomes Hemps, Inc.

Over the 170 years of business, they have seen many changes from opening additional location, buying and selling livestock. Today the business operates in the shop built-in 1981, this federally inspected slaughterhouse specializes in custom slaughtering of beef and lamb.

While the meat market is a large part of the business the Hemp family strives to raise the highest quality beef cattle to sell at the market. The Hemp family grazes beef cattle on their Jefferson farm before finishing them on grain to prepare them for slaughter. 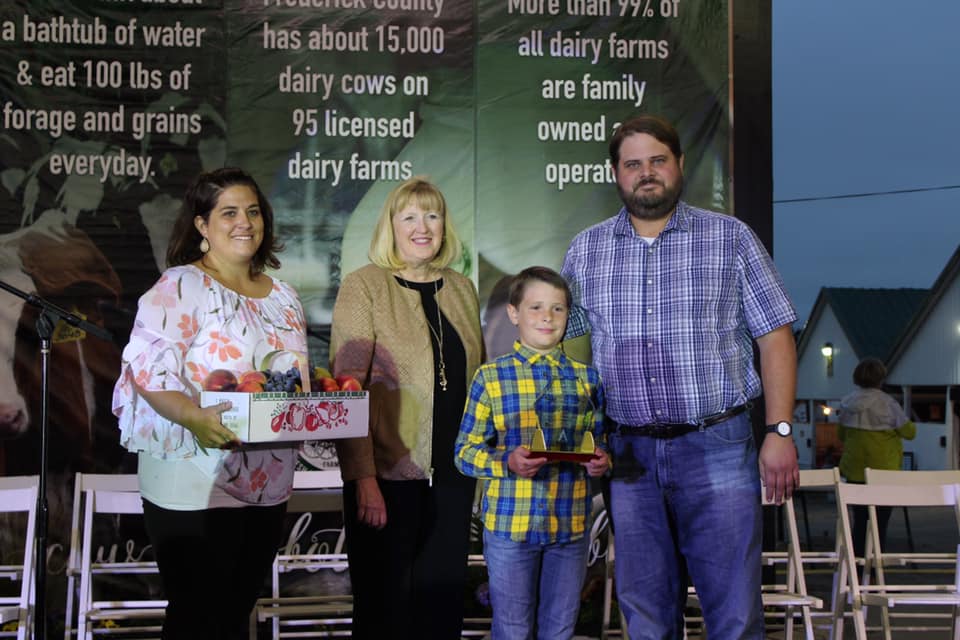 Growing up, the 2019 Young Farmer of the Year knew he always wanted to be a farmer. After graduating high school in 2002 Andrew began renting a 63 acre farm to begin his own heifer raising operation. Today, Andrew operates his own 68 acre farm in Walkersville milking 120 head of Holsteins and Jerseys along growing corn, soybeans and wheat. Andrew participates in many programs through the Catoctin and Frederick Soil Conservation Program. Through these programs he has built a manure pit and a Heavy Use Area building. Andrew participates in the Cover Crop Program yearly as well as the manure injection and manure transport program that helps farmers conserve nutrients through direct injection of manure and apply manure where the nutrient value is needed most and away from nearby fields that may be nutrient saturated.

Andrew is continuing his education at the University Of Baltimore School Of Law.