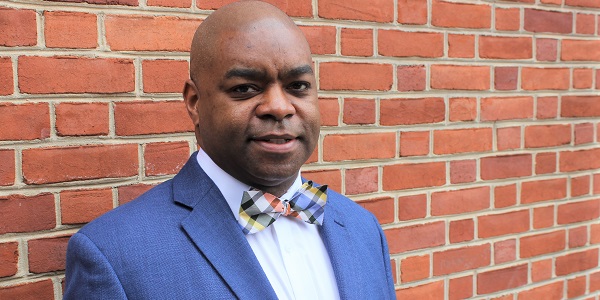 Today, I sit with Jay Mason, who works as an Associate Broker for Frederick Land & Home, and serves as the President of the Habitat for Humanity board.  Mason was elected to the Board of Education in November, 2018 for a four year term, and he was elected Vice President by the Board to serve a 2019-2020 term.

As the Quarterback and Captain of the Shepherd University football team from 1992-1994, it was easy to be assertive on the field.  Off the field, Mason struggled to focus, and would sit back, watch and wait.  He didn’t have a plan, and would leave school without graduating in 1994.  While working at Bushwaller’s, he was encouraged to get his real estate license.  He began working in residential real estate in 2004 and expanded into commercial real estate in 2017.

Mason is passionate when talking to businesses about relocating to Frederick County. According to Mason, “Frederick County has a well-educated driven workforce.  It’s a great place to raise a family, because there is so much to do with the kids, such as First Saturdays, Sunday evenings in Baker Park during the summer, live music, Movie Night on the Creek, great food, etc.  Live, Work and Play.  Frederick has it all.”

Mason and his wife, Beth, had their first child in 2003, which inspired him to return to college.  Completing his bachelor’s degree in 2008, he went on to further his education and received his Master’s Degree in Elementary Education in 2011.  After graduating he began volunteering with Eliminating Achievement Gaps, Inc. (EAG).  Mason believed in their vision, which is to inform, support and empower African American students, their families and community while engaging in a collaborative partnership with Frederick County Public Schools.  In deciding to volunteer with EAG, Mason said, “I thought to myself, this is where I can have the biggest impact.”

Speaking on mentorship, he said that if he could talk to his younger self and offer one piece of advice it would be, “Go get it!”  This is the wisdom he hopes to impart on the youth of today, to have a plan.   “You don’t need to decide what you will end up doing, but it is important to have a vision.  If you don’t go to college right out of high school, it’s never too late.  I am proof,” said Mason.

To assist students in coming up with that plan, Frederick County Public Schools has several Workforce Development programs.  The FCPS Lynx program at Frederick High creates individualized plans for student success. The Career and Technology Center has a long waiting list, and Mason hopes that it gets expanded.  “Each school has specialized programs whether it be in engineering, arts or agriculture.  We are trying to prepare kids for their future, and guide them.  We want to help them find out who they are.”

In addition to mentoring youth about the importance of having a plan and workforce programs, Mason says he hopes to teach kids to balance business and community engagement.  This starts at home for Mason, where his daughter and wife have volunteered at Heartly House for the last 6 years.  “Community is where you live, and you want that to be the best it possibly can be.  It is essential for kids to know that there are those less fortunate in the community that need help and guidance.  We need to show compassion to those who are less fortunate,” added Mason.

Mason’s closing message is, “Always continue to grow.”  Mason exemplifies this by having recently graduated from the Frederick County Minority Business Leaders Program in 2018.  About the program, Mason says, “This is a great program to help you start and grow your own business.  You learn from and are inspired by the presenters as well as your classmates.”

Who was your most significant mentor?

My father and brother, who I could always have an open conversation with.  I can always pick up the phone and call them or go to lunch with them.

What is your favorite book?

Beating the Odds by Eddie Brown

Martin Luther King Jr., and I would ask him how he remained peaceful while facing such adversity.